I've been thinking about other people's responses to my work recently. I find if I'm not taking many photographs myself or suffering from a lack of focus, I return to my older work and think about what I was trying to achieve and what pearls of wisdom were passed my way at the time.

For some reason I've returned to a body of work I called In-between, made in 2005 and exhibited in Antwerp in 2005/6. The work was all made on the London Underground and was an attempt at 'anonymous portraits'. One of the constant threads through my work is an examination of how we relate to the physical world around us, how we make and mark places and spaces and how we move around these.

This particular set of photographs was continuing to develop my thoughts on temporary and transient spaces. The work was actually made on a compact digital camera, with me standing on an Underground train platform, taking pictures of the passengers moving in and out of the stations, hence the blurring. The strange thing, and this is where other peoples reactions come in, is the time frame I happened to be doing this. I started in the January of 2005, but July of that year saw the terrorist bombing focussed around public transport targets. I was of course shocked and horrified, like everyone. However I continued making pictures through until September and so obviously experienced a marked change in atmosphere as well as a huge drop in people using the underground. It meant that when my show opened in the December of that year, everyone read the pictures as being about the bombings, especially as I had chosen to shoot quite low quality images that were blown up quite big, so they ended up having a CCTV aesthetic. Originally I had intended the work to be a video piece and this was really something carried over from shooting on video.

The reaction that fascinated me was the people at the opening tended to assume that the people in the pictures were either victims or perpetrators of the attacks. When presented with blurred or abstracted images, it would seem our brains search for clues and try to fill in the gaps. I love photograph's ability to do this and assume it is connected to it's association with truth or evidence, even in the digital age, where both of those are so easily manipulated. So for me this work ended up being more about how we interpret photographs and how we use slithers of visual information (gender, clothing, race, posture, etc) to help us 'read' the world and make decisions based on this.

I wrote this at the time:

In the contemporary urban world we routinely share spaces with unfamiliar people who we will probably never see again.  I am interested in this experience and how we leave evidence of our presence. This might be in the form of a dent in a seat, a memory in someone's mind, or a fleeting appearance on closed circuit television. My recent work is concerned with 'in-between'. The images are in-between photography and video, real and unreal.The people in the images inhabit an in-between space, travelling from one location to another. They stand framed by a door, a threshold between two places. A narrative is suggested to the viewer in a blurred, frozen frame, who are they? What are they doing? Where are they going? These are traces from a curious world without natural light, the photographer's usual source of inspiration. 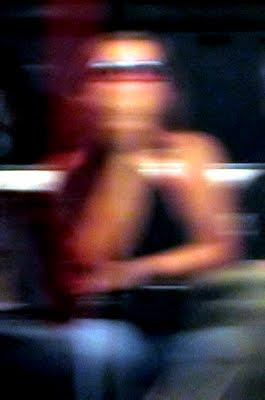 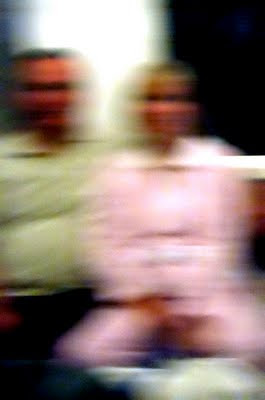 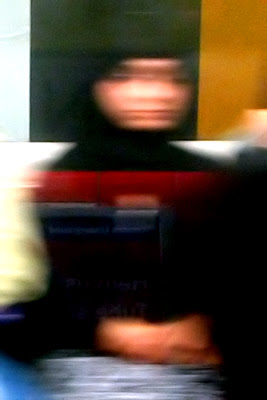